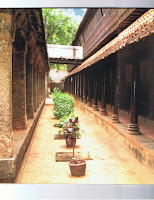 An elegant palace built with brick and mortar, along with liberal use of teak wood and brick tiles for roofing has been constructed by Marthanda Varma in 1744 AD after demolishing the mud Kaikulam Palace. The Kaikulam Fort and Palace was renamed Padmanabapuram palace as a dedication to Lord Padmanabha.

The Travancore Royal family followed matrilineal system of succession. The kings were succeeded by their sisters son. The old Princely state of Travancore was developed from the ancient kingdom of Venad which occupied western portion of Indian Peninsula. This kingdom formed as descendants of the ancient Chera Kings, whose celeberated capital is now known as Kodungalloor.

The entrance to the main edifice is controlled by another ornamental gateway with retainers for watch and ward. The gabled entrance has wooden ceiling profusely ornamented with lotus medallions. The most striking feature of the entrance is the clock-tower which is one of the oldest in India erected in 1832 A.D. and still continues to be in working order. The clocks chiming is heard around the surroundings as far 3 km in the night time.

The first floor the Poomuham has a council chamber or Mantrasala which is meant for holding discussions with ministers and prominent citizens. The floor off this hall, which is polished with the admixture of coconut shell ashes, eggs fermented in molasses and lime reflects the figure like a mirror. Next to the Mantrasala is the Dancing Hall which was used exclusively for the members of the royal family.


Adjacent to the Council Chamber and to the south of dancing hall is the dinning hall called “Uttupura”, with two floors (the ground and the first) each measuring roughly 78 by 6 metres and it would accommodate about 2000 people at a time. Feeding of about 2000 poor persons, it is said, was done here every day and so the king was called ”Dharmaraja”.

The most attractive building in the whole palace is the ‘Uppirika Malika’ which consists of three storied. ‘Uppirika’ is the abbreviated term of ‘Muppirika’ which means the residence of the eldest member of the family. A wooden cot is erected on the top most floor in the belief that “Lord Vishnu” the chief deity. The first floor contains a wooden cot made of 64 medicinal plants, on which Maharaja used to sleep. The medicinal cot was presented to Maharaja “Marthanda Varma” by the Dutch East India Company in 1750, as a mark of friendship. Entry to the second and third floor is not allowed due to structural weakness. Certain artifacts are alleged to have been stored here. All the staircases are wooden.

To the west of the Zuppirika Mandapa is the Navarathri Mandapa which is a spacious hall of exquisitely beautiful granite pillars with drooping pendants reminiscent of the Nayakar style of architecture. In the Navarathri Mandapa, performances of Bharatha Natya and musical recitals took place in the royal presence. 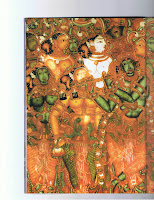 Currently the Palace is maintained and managed jointly by the Government of Kerala and TN under the administrative control of Govt of Kerala, being located in TN. Padmanabapuram palace is both beautiful and function designed to suit the humid weather conditions prevailing with high roofs. The building is always cool and quiet from inside. Most of the material used were domestic such as Laterite stones, Teak wood, burnt bricks, granite and Lime. The shiny black polish on the floor was created from a combo of charcoal produced from coconut shell, lime, white from egg and various other vegetable extracts. In order to preserve the polish visitors are not allowed to wear shoe or slippers inside the palace.

The rooms on the ground level was mainly used for storage. On the first floor the main dwelling for the kings were prevalent. The bathrooms had sewage connection passing through concealed channels. Lighting of the palace during the night was provided by Lamps.

There are temples in the court yard of the palace, they are Ramaswamy temple, Subramanya and Sarasvathy temple. Ancient painting, Wooden cots and chars, along with visitors durbar, etc are beautifully erected. The ventilation is of high class.

A museum is also constructed by the ASI in keeping with the splendour architecture of the palace housing various artifacts.


LOCATION : Padmanabapuram palace is actually in Tamil Nadu but all its heritage and roots are of kerala. It is almost bordering kerala in Kanyakumari district of Tamil Nadu. One can reach Padmanaburam from Kanyakumari which around 40 kms and from Trivandurm which is approximately 60 km. Otherwise a round taxi trip can cover various other destinations from Kanyakumari.
Posted by De Guide Travelouges at 10:29 PM 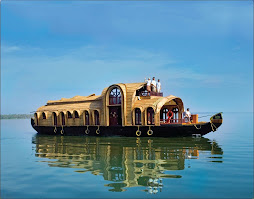 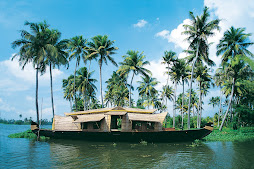 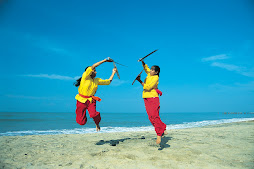 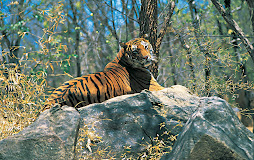 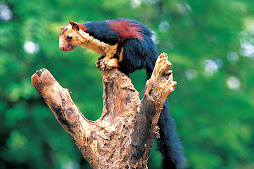 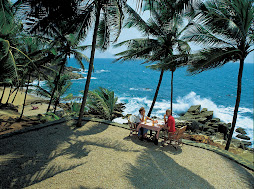 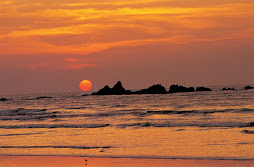 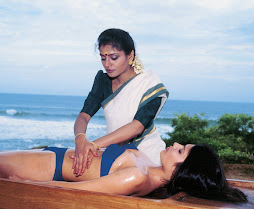